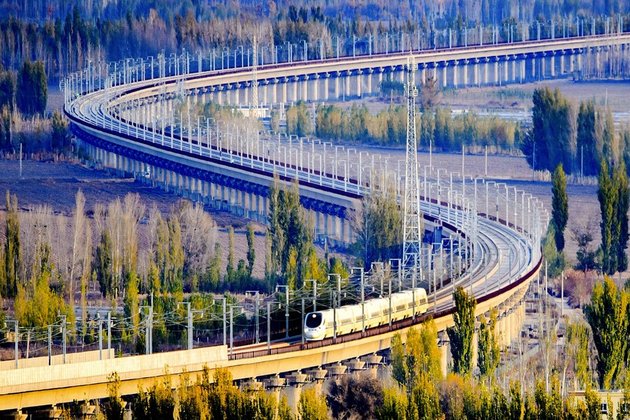 With the transport conference approaching, it is significant to see how transport promotes sustainable economic and social development in China, which could be summed up in "5Cs" -- comprehensive, convenient, clean, clever and creditworthy.

Almost everyone coming to China will be impressed by its massive and interconnected transport system, covering facilities from high-speed trains to automated ports that enable passengers and goods to move across the country.

By the end of 2020, the operation mileage of China's high-speed railways exceeded 38,000 km, accounting for over two-thirds of the world's total, official data showed.

"If you want to become rich, build a road first" is a popular Chinese saying, highlighting the role of transport in boosting local economies and improving people's livelihood.

Official data showed 2.36 million km of rural roads have been newly built or renovated in China since 2012, with the total rural road mileage reaching 4.38 million km, accounting for 84.3 percent of the country's total.

By 2020, China had 241 certified airports, up 58 from 2012. Nearly half of the new airports were located in areas lifted out of poverty, with aviation services covering 82.6 percent of the population living in areas that had shaken off poverty.

With the improvement of transport infrastructure, it has been much easier for people in rural and remote areas to travel and do business. For instance, the Lhasa-Nyingchi railway, starting operation in June this year, provided southeast Tibet with access to railway services for the first time in history.

China's transport sector has undergone a green transformation in recent years amid the country's pursuit for sustainable growth and rising public awareness for environmental protection.

To date, the electrification rate of the country's railways has reached 74.9 percent. The annual oil consumption of China's railway system reduced from the peak of 5.83 million tonnes in 1985 to 2.31 million tonnes at present.

The wide adoption of new energy vehicles (NEVs) in China, the world's largest auto market, has propelled the green shift of global transport. In the January-September period, NEV sales in China amounted to about 2.16 million units, up 190 percent year on year.

The country also unveiled an action plan to promote a green and low-carbon lifestyle, encouraging the public to give priority to green modes of travel, including walking, cycling or using public transport.

In Shanghai, an 8.5-km intelligent public transport line in Lin'gang New Area has been opened. Passengers can make appointments via cellphone apps to use intelligent buses which run clockwise for about 30 minutes on a single trip.

In Beijing, 278 roads stretching more than 1,027 km have been opened for self-driving vehicle tests as of the end of September, according to the Beijing Innovation Center for Mobility Intelligent.

By 2025, China will establish a basic ecosystem for driverless vehicles of Chinese standards, aiming to achieve scale production of driverless cars of conditional automation, according to a document released last year.

China has made continuous efforts on strengthening safety management and emergency response to ensure passengers a safe journey to destinations.

No major railway accidents have occurred since 2012 and railway accident fatalities in 2019 had dropped by 46.1 percent compared with 2012, according to a white paper titled "Sustainable Development of Transport in China."

Since the COVID-19 pandemic, China has rolled out multiple measures, including opening fast postal channels, to stop the virus from spreading via transport and ensure availability of emergency supplies and daily necessities, thus providing strong support for the anti-pandemic fight.