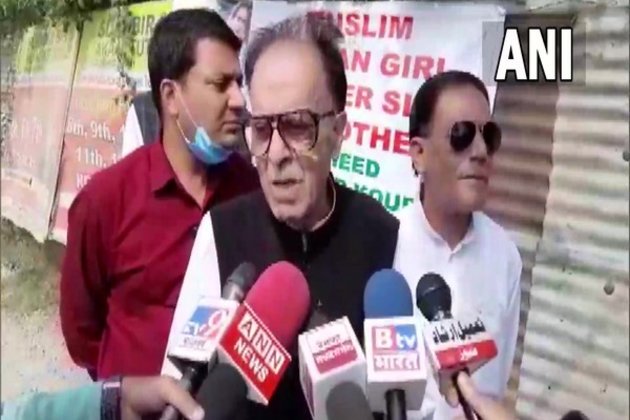 Srinagar (Jammu and Kashmir) [India], October 10 (ANI): Following the incidents of targeted killings in Jammu and Kashmir, Congress leader Saifuddin Soz on Sunday said that dialogue is the only solution to everything adding that people in the union territory do not support violence.

Citing some solutions to these killings, he stated that Prime Minister Narendra Modi has to speak to the public and the political parties in the union territory about it.

"Dialogue is the solution to everything. We have Army and para forces here but it can be done only when PM Modi and his colleagues understand that they will have to speak with the people and political parties of Kashmir. Nobody among the general public supports violence or these deaths," the Congress leader said while speaking to reporters here today.

He further claimed that the Muslim community, which is in majority in the union territory, is shaken to the core as people are thinking the killings were carried out by someone from their community.

"The majority community here -Muslims- is shaken to the core. They are sad it's being thought that they were killed by someone from the Muslim community by youth who took up weapons. But even they have something to say and should be heard," said Soz.

Earlier today, General Officer Commanding of Chinar Corps Lieutenant General DP Pandey said that some elements are trying to divide the society on communal lines and the people will expose those elements. He further said that such elements are jealous of the positive developments that have taken place in the country and the union territory over the last year.

In the recent past, several targeted killings have taken place in Jammu and Kashmir by terrorists over the last five days.

Two government teachers including Supinder Kaur from Srinagar and Chand from Jammu were killed on Thursday.

Makhan Lal Bindroo, a prominent Kashmiri Pandit and owner of a pharmacy in Srinagar was shot dead at his shop on Tuesday evening. Just minutes later a street hawker, Virendra Paswan from Bihar, was gunned down in Srinagar. Another civilian, Mohammad Shafi Lone, was killed in Naidkhai in Bandipora on the same day.

Lashkar-e-Taiba (LeT) backed new Kashmiri terror group 'The Resistance Front (TRF)' is suspected as the prime terror outfit behind targeted killings in Jammu and Kashmir in the past few days that led the Centre to hold a high-level meeting chaired by Union Home Minister Amit Shah on Thursday at his North Block office.

"The TRF, which is an offshoot of LeT, has been created by Pakistan in an apparent bid to make terrorist groups in Kashmir look like indigenous ones. The group has been getting regular support from the neighbouring country," officials in National Investigation Agency (NIA) had said.

IGP Kashmir Vijay Kumar earlier told ANI that the state police's intelligence inputs as well as previous records of the terror acts committed by the TRF clearly raise fingers towards the group behind the recent target killings in the Valley.

When asked about the prime suspect behind targeted killings in Kashmir, Kumar responded with "LeT (TRF)". (ANI)